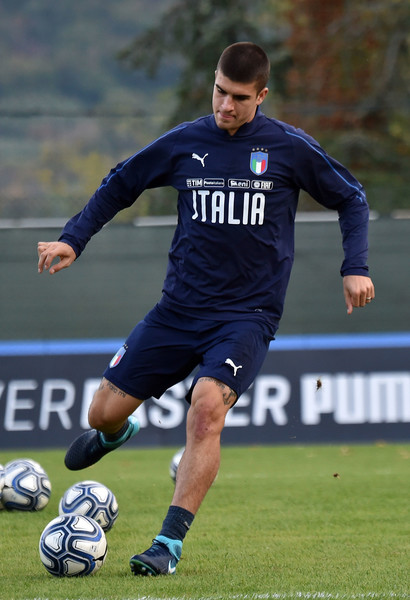 It may have only been a UEFA Euro 2020 qualifier against the minnows of Liechtenstein but for Gianluca Mancini, stepping out on to the Ennio Tardini pitch in Parma wearing the number 5 of legendary World Cup-winning captain Fabio Cannavaro would have no doubt been something quite special.

Comparing the young Mancini to Cannavaro at this stage in his career would, of course, be unfair. The 23 year old has only just completed his first season of consistent Serie A football, having made his debut in the top flight on 24 September 2017 for Atalanta against his old side Fiorentina.

It was in the 2018-19 season that he established himself in the Oribici starting XI, playing predominantly on the right of a back three alongside the likes of José Luis Palomino, Rafael Tolói and veteran Andrea Masiello. Across all competitions, he made 35 appearances and scored 6 goals – demonstrating the threat he poses in set piece situations as well as his general aerial ability. In 2019 alone, he won 63.3% of aerial duels across all competitions.

Mancini has solid pace and acceleration for a central defender, using these attributes effectively to step up and intercept the ball in the midst of opposition attacks. Some of his most impressive moments involve Mancini doing this before releasing a beautifully weighted through ball for a teammate further forward.

This aggression can see him lose the ball (8.49 times per game across his Serie A career) or misplace a pass a little more than would be ideal but for a centre back as clearly well rounded as Mancini is, playing another season under manager Gian Piero Gasperini is only going to be a positive for his development. The pressing, offensive style of Atalanta will only accelerate Mancini’s ability to read the game, win one on one duels and make good decisions with the ball.

He has already been linked to clubs such as Everton and Roma although at the time of writing it seems that he will stay in Bergamo. Get ready though for his stock to rise as he is thrust into the spotlight when Atalanta begin their maiden Champions League campaign.

*All statistics courtesy of Wyscout

iThere are no comments

Begin typing your search above and press return to search. Press Esc to cancel.